While my Instagram feed has a number of well-formed and aesthetically pleasing recipes, today I tried my hands on a rather simple vegan galette. It is one of the easiest pastries to prepare, the more rustic and irregular shape it has, the better.

You can almost use any kind of fruits in your galette, I tried an unusual combination of cherry tomatoes with concord grapes and kiwi. It turned out amazing and far better than I expected. Not only it looks divine because of a contrasting color palette but also the combination of sweet and sour sets up mini fireworks in your mouth.

How to make Vegan Galette Crust?

For the crust, you need ingredients that are basic to every pantry. Flour, sugar, salt, apple cider vinegar, chilled coconut oil, and cold icy water is all that is required to form a delightfully flaky and crisp pie crust dough.

You should try this Vegan Galette Recipe as it is

This galette recipe comes highly recommended for those who want a fuss-free cooking experience that leads to not only an appetizing rustic look but also makes your taste buds sing. Bon Appétit 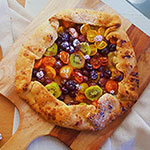