Mujadara is a deliciously simple Middle Eastern dish of rice and lentils garnished with crispy caramelized onions. It is a budget-friendly, nutritious and gluten-free vegan recipe.

Mujadara is also known as Mujadarra or Mujadarah. It is an ancient traditional middle eastern dish made with rice and lentils, topped with crispy onions. bulgur is also used as a core ingredient in some recipes.

Once the dish is ready it is topped with crispy caramelized onions, that are the king of this recipe and give a completely new direction to the flavors of this recipe.

You will find its roots in almost all Arab. It is a famous dish in Lebanese, Jordanian, Syrian and Palestinian cuisine. It is so simple, made with few inexpensive ingredients and is so comforting.

How to Make Mujadara?

You are going to love this gluten-free, vegan, and protein-rich recipe. If you are looking for recipes like this go check out Yellow Split Pea and One Pot Vegan Rice. 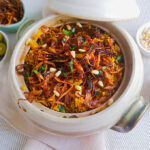 If you try this recipe, leave a comment and show some love by rating it in stars. Do not forget to take a picture and tag us @getsetvegan on Instagram. We would love to see this.